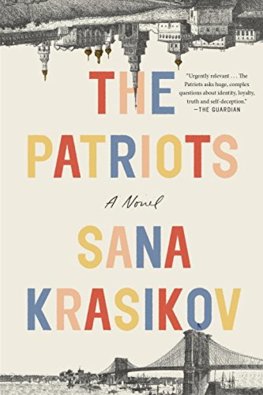 A sweeping multigenerational novel about idealism, betrayal, and family secrets set in the U.S. and Russia, from one of Granta's Best of Young American Novelists

When the Great Depression hits, Florence Fein leaves Brooklyn College for a job in Moscow--and the promise of love and independence. But once in Russia, she quickly becomes entangled in a country she can't escape. Many years later, Florence's son, Julian, immigrates back to the United States, though his work in the oil industry takes him on frequent visits to Moscow. When he learns that Florence's KGB file has been opened, he arranges a business trip to uncover the truth about his mother, and to convince his son, Lenny--trying to make his fortune in Putin's cutthroat Russia--to return home. What Julian discovers is both chilling and heartbreaking: an untold story of a generation of Americans abandoned by their country, and the secret history of two rival nations colluding under the cover of enmity.

The Patriots is a riveting evocation of the Cold War years, told with brilliant insight and extraordinary skill. Alternating between Florence's and Julian's perspectives, it is at once a mother-son story and a tale of two countries bound in a dialectic dance; a love story and a spy story; both a grand, old-fashioned epic and a contemporary novel of ideas. Through the history of one family moving back and forth between continents over three generations, The Patriots is a poignant tale of the power of love, the rewards and risks of friendship, and the secrets parents and children keep from one another.

Praise for The Patriots

"The Patriots is a historical romance in the old style: multigenerational, multi-narrative, intercontinental, laden with back stories and historical research, moving between scrupulous detail and sweeping panoramas, the first-person voice and a kaleidoscopic third, melodrama and satire, Cleveland in 1933 and Moscow in 2008."--Nathaniel Rich, The New York Times Book Review

"Extraordinary . . . The Patriots has the weight of a classic."--Commentary Magazine

"I found on every page an observation so acute, a sentence of such truth and shining detail, that it demanded re-reading for the sheer pleasure of it. The Patriots has convinced me that Krasikov belongs among the totemic young writers of her era."--Khaled Hosseini, author of And the Mountains Echoed and The Kite Runner

"The Patriots is a masterwork, a Dr. Zhivago for our times."--Yann Martel, author of The High Mountains of Portugal and Life of Pi

"A sustained feat of brilliance."--Anthony Marra, author of The Tsar of Love and Techno

The Fine Art of Invisible Detection

A Long Way From Home