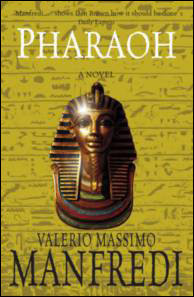 A rip-roaring archaelogical adventure from the master of historical fiction

Jerusalem, 586BC, the Kingdom of Judah is on the verge annihilation by the Babylonians. In the chaos the Prophet Jeremiah rushes to save the sacred Ark of the Covenant. As he locates the preordained hiding place which will make it impossible to be found, he makes a terrible discovery . . .

The Middle East, in the early 2000s. William Blake, a renowned Egyptologist has been called in to oversee the discovery of an amazing, magnificent and strange tomb of a Pharaoh many miles from the Valley of the Kings, located in a militarily senstive spot. His research will lead him to an amazing and world shattering discovery concerning Moses and the tribes of the Israelites and their flight from the land of Egypt.

'Manfredi . . . shows silly old Dan Brown how it should be done' Daily Express

The Book of Goose

The Handmaids Tale The Graphic Novel

How to Speak Whale