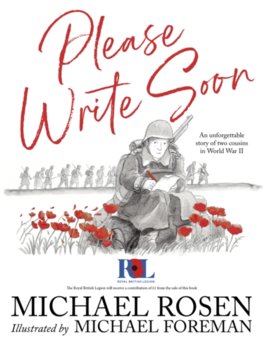 Named Children's Book of the Week by The Times! Inspired by a true family story, Michael Rosen presents an astonishing account of perseverance, love and hope in wartime. Beginning in 1939, young Solly in London exchanges letters with his teenaged cousin, Bernie, in Poland. While Solly is evacuated and tries his best to adjust to life in the English countryside, Bernie's parents know that as Jews they're not safe staying in Warsaw, so they send Bernie to the Russian-occupied side of the country in the hope that he'll be safer there.

Soon, though, he is arrested and sent off to a forced labour camp in Russia. As the cousins exchange sporadic letters, they try to keep their spirits up, trading jokes and observations about the world changing all around them. Then Bernie seizes the opportunity to join the "Anders Army" and fight the Axis powers, and tells Solly all about his experiences in Iraq and eventually Italy, where he fights alongside the British at the famous Battle of Monte Cassino.

Does Bernie survive and find a safe place to call home? With breathtaking illustrations by beloved illustrator Michael Foreman, this is an unforgettable story of courage and love, perfect for the whole family to share. Michael Rosen is one of the best-known figures in the children's book world, known for his work as poet and author of classic books such as WE'RE GOING ON A BEAR HUNT. This book is a perfect companion to POPPY FIELD by Michael Morpurgo and Michael Foreman.

Together, the books are a wonderful introduction to the history of the great wars of the 20th century and the importance of Remembrance.

The Disappearance of Emile Zola

Were Going on a Bear Hunt

The Two Lives of Lydia Bird

The Orchid and the Dandelion