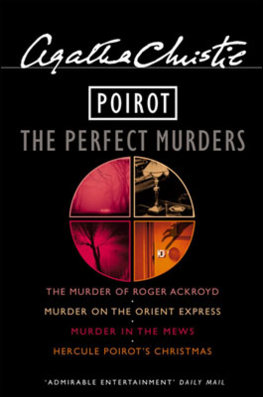 A brand new Poirot omnibus, featuring four of the world-renowned detective′s most challenging cases: The Murder of Roger Ackroyd, Murder on the Orient Express, Murder in the Mews and Hercule Poirot′s Christmas.

It seems Hercule Poirot can never escape murder - and in this collection, the crimes are probably the finest he has ever had to solve. Locked rooms, wealth and jealousy - outwardly all very similar, but when the detective begins to dig, the motives and solutions couldn′t be more different...The Murder of Roger Ackroyd

In the quiet village of King′s Abbot, a wealthy widower is found stabbed to death in his study...Murder on the Orient Express

A wealthy American dies of multiple stab wounds on a train bound for Paris...Murder in the Mews

A sadistic old man is brutally murdered in his locked study...