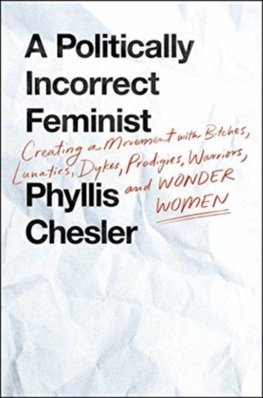 Phyllis Chesler was a pioneer of Second Wave Feminism. Chesler and the women who came out swinging between 1967-1972 integrated the want ads, brought class action lawsuits on behalf of economic discrimination, opened rape crisis lines and shelters for battered women, held marches and sit-ins for abortion and equal rights, famously took over offices and buildings, and pioneered high profile Speak-outs. They began the first-ever national and international public conversations about birth control and abortion, sexual harassment, violence against women, female orgasm, and a woman's right to kill in self-defense.

Now, Chesler has juicy stories to tell. The feminist movement has changed over the years, but Chesler knew some of its first pioneers, including Gloria Steinem, Kate Millett, and Andrea Dworkin. These women were fierce forces of nature, smoldering figures of sin and soul, rock stars and action heroes in real life.

Some had been viewed as whores, witches, and madwomen, but were changing the world and becoming major players in history. In Memoir of a Politically Incorrect Feminist, Chesler gets chatty while introducing the reader to some of feminism's major players and world-changers.

Slip of the Keyboard

All Creatures Great and Small