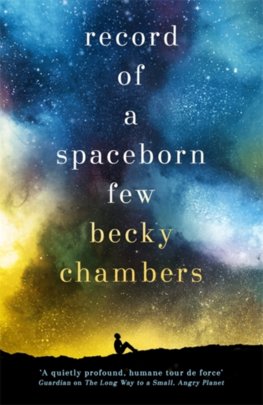 'The best speculative fiction currently being written' John Connolly. From the ground, we stand. From our ship, we live.

By the stars, we hope. The incredible new novel by Becky Chambers, author of the beloved The Long Way to a Small, Angry Planet. #SpacebornFewCenturies after the last humans left Earth, the Exodus Fleet is a living relic, a place many are from but few outsiders have seen.

Humanity has finally been accepted into the galactic community, but while this has opened doors for many, those who have not yet left for alien cities fear that their carefully cultivated way of life is under threat. Tessa chose to stay home when her brother Ashby left for the stars, but has to question that decision when her position in the Fleet is threatened. Kip, a reluctant young apprentice, itches for change but doesn't know where to find it.

Sawyer, a lost and lonely newcomer, is just looking for a place to belong. And when a disaster rocks this already fragile community, those Exodans who still call the Fleet their home can no longer avoid the inescapable question:What is the purpose of a ship that has reached its destination?PRAISE'Richly human, believable [and] compelling . .

. underlain with a deep compassion and a feeling for community' Tor.com. 'Terrific.

. . a masterly exploration of characterisation and diversity wrapped in intensity, heartbreak and tension.' Joanne Harris, author of Chocolat.

'An emotional, moving look at what it means to be human, and the importance of heritage and legacy' Lauren James, author of The Loneliest Girl in the Universe. 'Exactly what I hoped it would be and more . .

. Moving in what feels like small personal ways but is actually big, universal ways and it is uplifting on the same scale' Forbidden Planet.

A Closed and Common Orbit

The Long Way to a Small, Angry Planet

To Be Taught, If Fortunate

To be Taught, If Fortunate