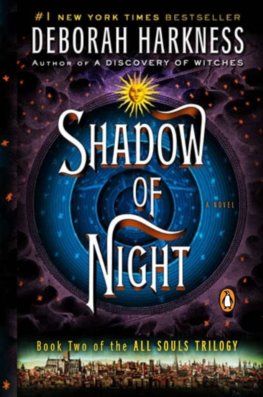 The #1 New York Timesbestselling sequel to A Discovery of Witchesis as ';enchanting, engrossing, and as impossible to put down as its predecessor' (Miami Herald)

J. K. Rowling, Stephenie Meyer, Anne Riceonly a few writers capture the imagination the way that Deborah Harkness has done with books one and two of her New York Timesbestselling All Souls trilogy.

A Discovery of Witchesintroduced reluctant witch Diana Bishop, vampire geneticist Matthew Clairmont, and the battle for a lost, enchanted manuscript known as Ashmole 782.

Harkness's much-anticipated sequel, Shadow of Night, picks up from A Discovery of Witches' cliffhanger ending. Diana and Matthew time-travel to Elizabethan London and are plunged into a world of spies, magic, and a coterie of Matthew's old friends, the School of Night. As the search for Ashmole 782deepens and Diana searches for a witch to tutor her in magic, the net of Matthew's past tightens around them, and they embark on a very differentand vastly more dangerousjourney.

To Sleep in a Sea of Stars

Lord of the Rings box set