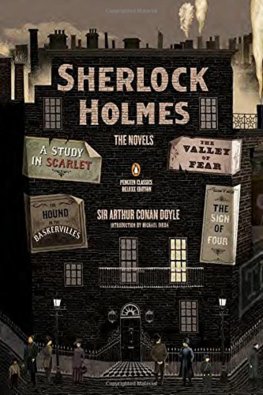 All four of Arthur Conan Doyle's legendary Sherlock Holmes novels, collected in a unique Graphic Deluxe edition with an introduction by Michael Dirda

In 1886, an unsuccessful ophthalmologist on the southern coast of England decided to try his hand at writing a detective story. Unlike his historical romances, which required the utmost care, this could be dashed off quickly. The first draft, featuring a Mr. Sherrinford Holmes, was a bit rough around the edges, but with a little revision, something astonishing emerged: Sherlock Holmes, Dr. Watson, and A Study in Scarlet. As if with no warning, they sprung forth from their creator's head, fully-formed in a new style so well-defined it felt immediately like an established genre. Their partnership cemented within pages of the book's opening-the sum of their parts accomplishing far more than they could apart. Sporting his signature billowing coat and pipe in hand, the genius investigator Holmes captivated readers with his alluring melancholy and superhuman intuition, while Watson remained ever the perfect foil, a classic Victorian gentleman with brilliant intellect.

Collected here are all four Holmes novels-A Study in Scarlet, The Sign of Four, The Hound of the Baskervilles, and The Valley of Fear-tracing the origins of the pair up through their greatest showdowns with arch-enemy Professor Moriarty. Set in the seductive shadow-world of Victorian London, they are at once an indelible portrait of their time and immortal stories unmarred by passing time. Though endlessly reinterpreted, reinvented and imitated, they have never been surpassed: the stories of Holmes and Watson lives on as immediate and original in our time as in their own.

The Valley Of Fear

The Adventures of Sherlock Holmes

Hound of the Baskervilles

Tess of the DUrbervilles