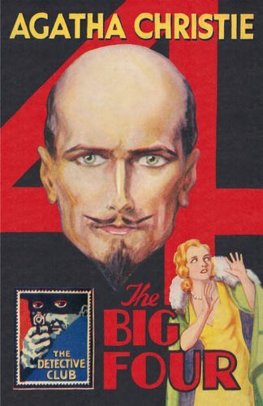 The Big Four is the most formidable crime syndicate of all time. A sinister Chinaman, a multi-millionaire, a beautiful Frenchwoman and ‘The Destroyer’ are terrorising the world with their fiendish genius. Only Hercule Poirot’s sensational methods of deduction stand in their way of world domination, and after adventures as strange as the Arabian nights, Poirot runs them to earth at last in a cave in the Dolomites.

The astonishing success of The Murder of Roger Ackroyd put Agatha Christie under enormous pressure to deliver another Poirot book at a time of intense personal turmoil for the author. Suffering from writer’s block, and with the help of her brother-in-law, Campbell Christie, she reluctantly dug out The Man Who Was Number Four, a 12-week serial she had written for The Sketch three years before – long before Ackroyd – and began adapting it into a full-length novel. . .

This Detective Story Club classic is introduced by Agatha Christie historian Karl Pike, who has unearthed the 12 magazine stories from the British Library archives and presents here the original version of The Big Four, an adventurous serial novel full of incident and cliffhangers, unseen since 1924.

The Detective Club The Murder Of Roger Ackroyd

The Mystery Of Three Quarters: The New Hercule Poirot Mystery