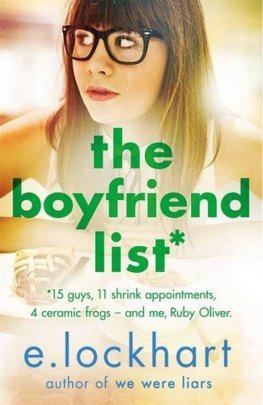 15 Guys, 11 Shrink Appointments, 4 Ceramic Frogs and Me, Ruby Oliver From E. Lockhart, author of the best-seller We Were Liars, and the highly-acclaimed The Disreputable History of Frankie Landau-Banks, comes this hilarious and heart-warming series. Ruby Oliver is fifteen and has a shrink. But before you make up your mind about her, you should know that she has had a pretty awful (and eventful) past ten days. She has: lost her boyfriend (#13 on the boyfriend list), lost her best friend, lost all her other friends, did something suspicious with a boy (#10), did something advanced with a boy (#15), had an argument with a boy (#14), drank her first beer (someone handed it to her), got caught by her mom (ag!), had a panic attack (scary), lost a lacrosse game, failed a math test, hurt Meghan's feelings, became a social outcast, and had graffiti written about her in the girls' bathroom. But don't worry, Ruby lives to tell the tale. Through a special assignment to list all the boys she's ever had the slightest, little, any-kind-of-anything with, comes an unfortunate series of events that would be enough to send any girl in a panic.

Nicholas and the Gang

Because You Love to Hate Me

The Kissing Booth 3: One Last Time