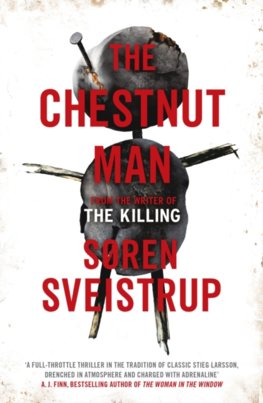 'A full-throttle thriller in the tradition of classic Stieg Larsson, drenched in atmosphere and charged with adrenaline. Buckle up. You'll gulp down every word.

I loved this book' A. J. Finn, author ofThe Woman In The Window

THE DEBUT NOVEL FROM THE CREATOR AND WRITER OF THE KILLING

The police make a terrible discovery in a suburb of Copenhagen.

A young woman has been killed and dumped at a playground. One of her hands has been cut off, and above her hangs a small doll made of chestnuts.

Young detective Naia Thulin is assigned the case. Her partner is Mark Hess, a burned-out investigator who's just been kicked out of Europol's headquarters in The Hague.

They soon discover a mysterious piece of evidence on the chestnut man - evidence connecting it to a girl who went missing a year earlier and is presumed dead, the daughter of politician Rosa Hartung. A man confessed to her murder, and the case is long since solved.

Soon afterwards, another woman is found murdered, along with another chestnut man. Thulin and Hess suspect that there's a connection between the Hartung case, the murdered women and a killer who is spreading fear throughout the country.

But what is it?

Thulin and Hess are racing against the clock, because it's clear that the murderer is on a mission that is far from over . . .

Reader, I Married Him