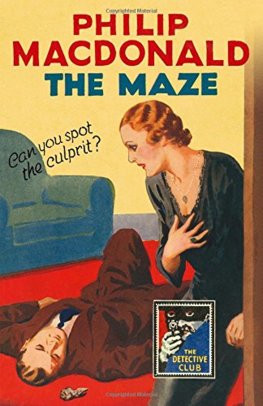 The Detective Club The Maze

The ultimate murder mystery - can you find the murderer before the detective?

Maxwell Brunton was found dead in his study – murdered beyond doubt. There were ten people in the house on the night of the murder, and at least seven of them had an adequate motive for murdering him. But Anthony Gethryn has only the evidence given at the Coroner’s inquest to work with. In other words YOU, the reader, and HE, the detective, are upon equal footing. HE solves the mystery. Can YOU?

The Maze, first published in 1932, is Philip MacDonald’s contribution to the conception of the totally logical puzzle – an exercise in ratiocination, as Poe called it – which so preoccupied detective story writers in the ‘Golden Age’ of the 1920s and ’30s. Written in the form of a court transcript, it is the ultimate puzzle novel, an absolutely fair test of the reader’s ability as a detective . . . an enthralling story – one of Philip MacDonald’s best.

This Detective Story Club classic includes an introduction by Julian Symons, who selected The Maze for the Crime Club’s 1980 Jubilee reprint series, celebrating the best of 50 golden years of crime publishing.

The Cut Out Girl