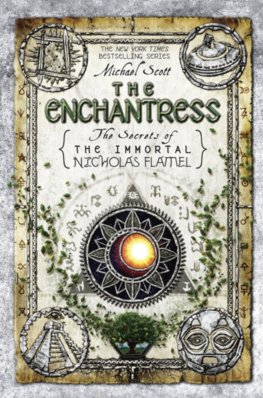 Nicholas Flamel appeared in J.K. Rowling's Harry Potterbut did you know he really lived? And he might still be alive today!Discover the truth in Michael Scott's New York Timesbestselling series the Secrets of the Immortal Nicholas Flamel with The Enchantress, book six.

The two that are one must become the one that is all. One to save the world, one to destroy it.
Sophie and Josh Newman traveled ten thousand years into the past to Danu Talis when they followed Dr.

John Dee and Virginia Dare. And it's on this legendary island that the battle for the world begins and ends.
Scathach, Prometheus, Palamedes, Shakespeare, Saint-Germain, and Joan of Arc are also on the island. And no one is sure whator whothe twins will be fighting for.
Today the battle for Danu Talis will be won or lost.
But will the twins of legend stand together?
Or will they stand apartone to save the world and one to destroy it.

Read the whole series!
The Alchemyst
The Magician
The Sorceress
The Necromancer
The Warlock
The Enchantress

Chester Parsons is not a Gorilla

9 From the Nine Worlds: Magnus Chase and the Gods of Asgard