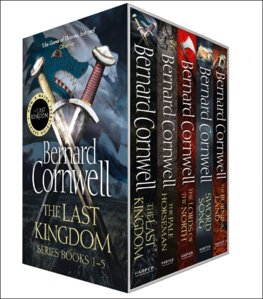 The first five books in Bernard Cornwell’s No.1 bestselling THE LAST KINGDOM series, a captivating historical fiction series that transports readers to a time when epic heroes rose amidst the tumult and war of the 9th Century.

BBC2’s major TV show THE LAST KINGDOM is based on the first two books in the series.

Bernard Cornwell’s captivating historical fiction series, THE LAST KINGDOM, tells the tale of Alfred the Great, his descendants and the enemies they faced at the dawn of England. Against their lives Bernard Cornwell has woven a story of divided loyalties, reluctant love and desperate heroism. In Uhtred, he has created one of his most captivating and heroic characters.

The series follows Uhtred from his childhood – an English boy, growing up among Danes with increasingly conflicting loyalties – to his adulthood as he becomes one of the greatest warriors of England, fighting epic battles and navigating the ever-shifting landscape of England.

BBC2’s major TV show THE LAST KINGDOM is based on the first two books in the series.

The box set includes:
The Last Kingdom
The Pale Horseman
The Lords of the North
Sword Song
The Burning Land

War Of The Wolf

The Lords of the North

Warriors of the Storm

Terry Pratchett: A Life With Footnotes