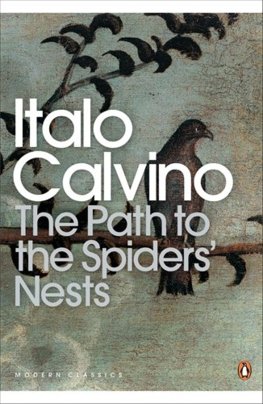 Path to the Spiders Nests

Pin is a bawdy, adolescent cobbler's assistant, both arrogant and insecure who - while the Second World War rages - sings songs and tells jokes to endear himself to the grown-ups of his town - particularly jokes about his sister, who they all know as the town's 'mattress'. Among those his sister sleeps with is a German sailor, and Pin dares to steal his pistol, hiding it among the spiders' nests in an act of rebellion that entangles him in the adults' war.

Italo Calvino, one of Italy's finest postwar writers, has delighted readers around the world with his deceptively simple, fable-like stories. He was born in Cuba in 1923 and raised in San Remo, Italy; he fought for the Italian Resistance from 1943-45. His major works include Cosmicomics (1968),Invisible Cities (1972), and If on a winter's night a traveler (1979). He died in Siena in 1985.

Martin L. McLaughlin is Professor of Italian and Fiat-Serena Professor of Italian Studies at the University of Oxford where he is a Fellow of Magdalen College. In addition to his published academic works he is the English translator of Umberto Eco and Italo Calvino among many others.

Under the Jaguar Sun

Why Read the Classics

The Distance of the Moon

The Narrative of Trajan's Column

The Forty Days of Mush Dagh