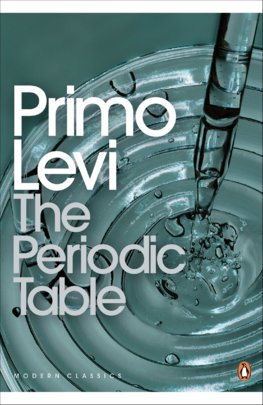 Primo Levi's The Periodic Table is a collection of short stories that elegantly interlace the author's experiences in Fascist Italy, and later in Auschwitz, with his passion for scientific knowledge and discovery. This Penguin Modern Classics edition of is translated by Raymond Rosenthal with an essay on Primo Levi by Philip Roth.

A chemist by training, Primo Levi became one of the supreme witnesses to twentieth-century atrocity. In these haunting reflections inspired by the elements of the periodic table, he ranges from young love to political savagery; from the inert gas argon - and 'inert' relatives like the uncle who stayed in bed for twenty-two years - to life-giving carbon. 'Iron' honours the mountain-climbing resistance hero who put iron in Levi's student soul, 'Cerium' recalls the improvised cigarette lighters which saved his life in Auschwitz, while 'Vanadium' describes an eerie post-war correspondence with the man who had been his 'boss' there.

In his essay, Philip Roth reproduces a conversation with Primo Levi, delving into the process of Levi's authorial technique, his sense of identity and distinctiveness and the relationship between science, writing and survival.

Primo Levi (1919-87), an Italian Jew, did not come to the wide attention of the English-reading audience until the last years of his life. A survivor of the Holocaust and imprisonment in Auschwitz, Levi is considered to be one of the century's most compelling voices, and The Periodic Table is his most famous book. Levi is the author of Moments of Reprieve and If Not Now, When?, also available in Penguin Modern Classics.

Philip Roth is the author of Nemesis and The Plot Against America, and winner of the both the Pulitzer prize, and the Man Booker International prize.

If you enjoyed The Periodic Table, you might like Levi's If Not Now, When?, also available in Penguin Modern Classics.

'A book it is necessary to read'
Saul Bellow, author of Herzog

'One of the finest writers in post-war Italy'
The Times

If This Is Man And The Truce

The Valley Of Fear