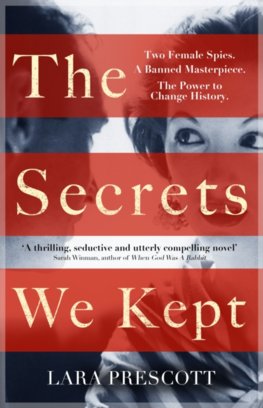 A celebrated Russian author is writing a book, Doctor Zhivago, which could spark dissent in the Soviet Union. The Soviets, afraid of its subversive power, ban it.

But in the rest of the world it's fast becoming a sensation.

The CIA plans to use the book to tip the Cold War in its favour.

Their agents are not the usual spies, however.

Two typists - the charming, experienced Sally and the talented novice Irina - are charged with the mission of a lifetime: to smuggle Doctor Zhivagoback into Russia by any means necessary.

A BOOK THAT CHANGED HISTORY

Sold in twenty-five countries and poised to become a global literary sensation, Lara Prescott's dazzling first novel about the women in the CIA's typing pool and the fate of Boris Pasternak's banned masterpiece is a sweeping page turner and the most hotly anticipated debut of the year.
________________
'What a fantastic novel The Secrets We Keptis.

Thrilling, seductive and thoroughly compelling - Lara has created something really special. And it's made me want to re-read Doctor Zhivago! I absolutely loved it!' SARAH WINMAN, author of TIN MAN

Violet Bent Backwards Over the Grass