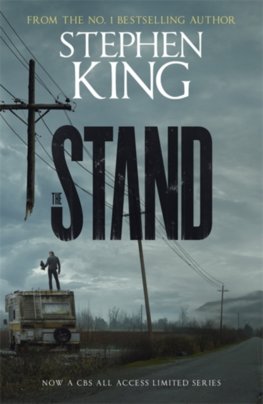 The tie-in edition of the nine-part CBS All Access series starring Whoopi Goldberg, Alexander Skarsgard, and James Marsden, premiering in the USA December 17, 2020.

FIRST CAME THE VIRUS. AND THEN THE DREAMS...

A man escapes from a biological testing facility, unknowingly carrying a deadly weapon: a mutated strain of super-flu that will wipe out over 99 percent of the world's population within a few weeks.

Those who remain are scared, bewildered, and in need of a leader. Two emerge - Mother Abagail, the benevolent 108-year-old woman who urges them to build a peaceful community in Boulder, Colorado; and Randall Flagg, the 'dark man', the apostate of death, the warlord of the charnel house and Prince of Evil.

Now the survivors must choose between them - and ultimately decide the fate of all humanity.

Stephen King's apocalyptic vision of a world blasted by plague and tangled in an elemental struggle between good and evil is a classic for our times.

'His work plumbs with unnerving accuracy, the hopes and fears of an entire nation' - Observer

Bridget Jones: Mad About the Boy

The Last Act of Love