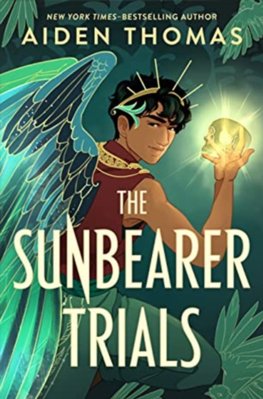 Only the most powerful and honorable will be chosen in this breathtaking, Mexican-inspired fantasy from Aiden Thomas, the author of the New York Times-bestselling Cemetery Boys. As each new decade begins, the Sun's power must be replenished so that Sol can keep traveling along the sky and keep the chaotic Obsidian gods at bay. Sol selects ten of the most worthy semidioses to compete in the Sunbearer Trials.

The winner carries light and life to all the temples of Reino del Sol, but the loser has the greatest honor of all--they will be sacrificed to Sol, their body melted down to refuel the Sun Stones, protecting the world for another ten years. Teo, a seventeen-year-old Jade semidios and the trans son of the goddess of birds, isn't worried about the Trials . .

. at least, not for himself. His best friend, Niya is a Gold semidios and a shoo-in for the Trials, and while he trusts her abilities, the odds of becoming the sacrifice is one-in-ten.

But then, for the first time in over a century, the impossible happens. Sol chooses not one, but two Jade competitors. Teo, and Xio, the thirteen-year-old child of the god of bad luck.

Now they must compete in five trials against Gold opponents who are more powerful and better trained. Worst of all, Teo's annoyingly handsome ex-best friend and famous semidios Hero, Aurelio is favored to win. Teo is determined to get himself and his friends through the trials unscathed--for fame, glory, and their own survival.

Lost in the Never Woods

Skin of the Sea