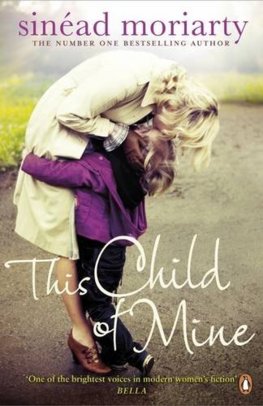 This Child of Mine

Sinéad Moriarty's breathtaking eighth novel, This Child of Mine, is the story of two daughters, two mothers and the extraordinary bond of motherly love. It's a unique blend of the storytelling genius of Jodi Picoult and the compassion and humour of Marian Keyes, in a complex and deeply involving story that will have readers arguing about the nature of motherhood and the rights and wrongs of the characters' actions.

Sophie is a happy 18-year-old living in London with Anna, her Irish mother. Anna has devoted her life to Sophie. It may be just the two of them but Anna has more than enough love to give. Sophie has everything she could ever need.

Laura is a not-so-happy artist. She too has a daughter, Mandy. But Laura is haunted by the loss of her first child, Jody. Happy-go-lucky as she is, Mandy lives in Jody's shadow and wonders why her mother can never let go.

Both mothers carry secrets and cannot forget the day their paths crossed. But a chance discovery is about to bring everything into the open and mothers and daughters, love and lies, past and future, will spectacularly collide.

Sinéad Moriarty's novels have sold over half a million copies in Ireland and the UK and she is a four times nominee for the popular fiction Irish Book Award. She has won over readers and critics telling stories that are funny, humane, moving and relevant to modern women. This Child of Mine is Sinéad at her very best.

Sinéad Moriarty lives with her family in Dublin. Her previous titles are: The Baby Trail; A Perfect Match; From Here to Maternity; In My Sister's Shoes; Keeping It In the Family (also titled Whose Life is it Anyway?); Pieces of My Heart and Me and My Sisters.

Do you Come Here Often