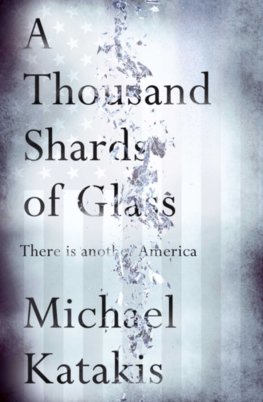 Once upon a time, Michael Katakis lived in a place of big dreams, bright colours and sleight of hand. That place was America. One night, travelling where those who live within illusions should never go, he stared into the darkness and glimpsed a faded flag where shadows gathered, revealing another America.

It was a broken place, bred from fear and distrust - a thousand shards of glass - filled with a people who long ago had given away all that was precious; a people who had been sold, for so long, a foreign betrayal that finally came from within, and for nothing more than a handful of silver. These essays, letters and journal entries were written as a farewell to the country Michael loves still, and to the wife he knew as his 'True North'. A powerful and personal polemic, A Thousand Shards of Glass is Michael's appeal to his fellow citizens to change their course; a cautionary tale to those around the world who idealise an America that never was; and, crucially, a glimpse beyond the myth, to a country whose best days could still lie ahead.

'A Thousand Shards of Glass, a book written with remarkable prescience some years ago, recounts with sad eloquence his disillusionment with America. His is a voice full of common sense and simple humanity that seem to have been lost in contemporary America. It is a voice both kind and angry, the voice of a reasonable man who has not lost his idealism but who is deeply troubled by what he sees and describes so clearly' Dr.

Henry Marsh, author of Do No Harm'Katakis writes with an economic elegance about the rift between America as advertised and America as experienced with the passion and precision of a poet' Rick Klefell, NPR

A Question of Trust

The Bookshop On Rosemary Lane

Word and the Bomb

Everything I Never Told You