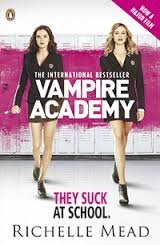 Read it before it hits cinemas in February 2014!

ONLY A TRUE BEST FRIEND CAN PROTECT YOU FROM IMMORTAL ENEMIES . . .

Lissa Dragomir is a mortal vampire. She must be protected at all times from the fiercest and most dangerous vampires of all - the ones who will never die.

Rose Hathaway is Lissa's best friend - and her bodyguard.

Now, after two years of illicit freedom, they've been dragged back inside the iron gates of St. Vladimir's Academy. The girls must survive a world of forbidden romances, a ruthless social scene and terrifying night-time rituals. But above all, they must never let their guard down, lest the immortal vampires take Lissa - forever . . .

'We're suckers for it!' - Entertainment Weekly

Unicorn In The Barn

Life in a Fishbowl

The Hunting of the Snark

The Enchantress Returns (Land of Stories # 2)