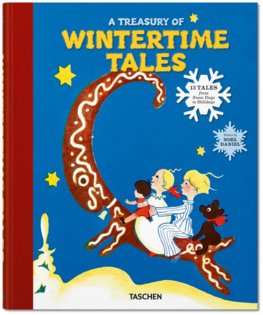 Noel Daniel
33,95 €
Na sklade
Despite its chilly weather and barren landscapes, wintertime has inspired some of the most magical and heartwarming stories in history. This season of celebration, frost and snow, religion, tradition, and adventure has produced such holiday classics as Clement Moore’s 'Twas the Night Before Christmas, and such colorful tales as the account of a pre-Christmas Posada parade in Mexico City.

A Treasury of Wintertime Tales pays homage to this rich variety of winter storytelling with thirteen tales dating 1823–1972. Featuring authors and illustrators of American, German, Hungarian, Italian, Mexican, Norwegian, Russian, and Swedish descent, it includes stories about playful snowflakes that have come to life, losing one’s mittens, encounters with the Sami people in Northern Scandinavia, celebrating the Chinese New Year, and more.

Each tale has been chosen for its inspiring artwork and soulful plot, resulting in a carefully-curated collection of adventure, community, and culture.
Click here to download table of contents
The editor:
TASCHEN editor Noel Daniel graduated from Princeton University and studied in Berlin on a Fulbright Scholarship. She earned a master’s degree in London and served as director of a photography art gallery before becoming a book editor. Her TASCHEN books to date include The Fairy Tales of Hans Christian Andersen(2013), The Fairy Tales of the Brothers Grimm (2011), Magic 1400s–1950s (2009), and The Circus 1870s–1950s (2008).