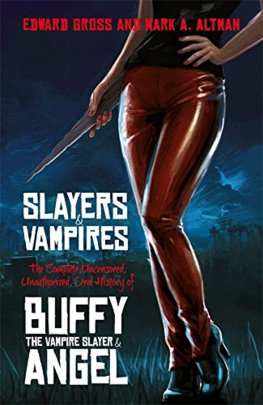 In 1997 the first episode of a new show called Buffy the Vampire Slayer aired. It's fair to say that following the critically panned and commercially unsuccessful film of the same name five years previously, expectations were not high. However over the course of 144 episodes and the successful spin-off show, Angel, it produced some of the best and best-loved television of all time. And its creator Joss Whedon's subversive take on supernatural stories has shaped everything from Marvel to Star Wars.

Before Buffy, if a girl and a monster went into an alleyway and there was no boy to save her, only the monster came back out. Buffy changed all that.

Twenty years on, the story of the girl who saved the universe . . . a lot and the world's most emotionally complicated vampire is told in Slayers and Vampires by the people who were there.

TV experts Edward Gross and Mark Altman talked to almost 100 writers, producers, directors, filmmakers, sociologists and stars from Buffy The Vampire Slayer and Angel in new and vintage interviews from their personal archives, among them:

The Secrets of Tenet: Inside Christopher Nolans Quantum Cold War