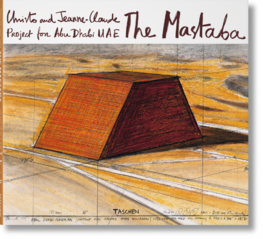 Christo & Jeanne-Claude, Wolfgang Volz, Matthias Koddenberg, Jonathan William Henery
43,95 €
Na sklade
The Mastaba, Project for Abu Dhabi, United Arab Emirates will not only be Christo and Jeanne-Claude’s greatest achievement and only permanent large-scale work, but also the biggest sculpture in the world and one of the most significant creations in history.

Conceived in 1977, The Mastaba takes its name from an ancient word describing a trapezoidal structure with a flat top, two vertical walls and two outward sloping sides.Christo and Jeanne-Claude’s Mastaba will be made from 410,000 multi-colored barrels to form a mosaic of bright sparkling colors that echoes Islamic architecture. The sculpture will be 150 meters (492 feet) high, 225 meters (738 feet) deep at the 60 degree slanted walls and 300 meters (984 feet) wide at the vertical walls.

The individual colors and the positioning of the 55-gallon steel barrels were chosen byChristo and Jeanne-Claude in 1979, the year in which the artists first visited Abu Dhabi. They have since returned many times, creating a longstanding friendship with the Emirate and its people. In 2012, the ideal location for The Mastaba was identified approximately 160 kilometers south of Abu Dhabi in the stunning desert of Al Gharbia, surrounded by some of the most spectacular dunes in the world.

This book, designed by Christo himself, tells the story of the project  from 1977 until today and is illustrated throughout with the photography of Christo and Jeanne-Claude’s exclusive photographer, Wolfgang Volz. The evolution of The Mastaba is also captured through images of Christo’s earliest drawings from the 1970s to his most recent work, and through the publication of maps, technical data, and engineering drawings. Many of these images and documents are published here for the first time.

Wolfgang Volz has worked with Christo and Jeanne-Claude as the exclusive photographer of their works since 1971. He was also project director (with Roland Specker) for Wrapped Reichstag and (with Josy Kraft) for Wrapped Trees, and was in charge of The Wall - 13,000 Oil Barrels, 1999. His close collaboration has resulted in many books and more than 300 exhibitions in museums and galleries around the world.

Jonathan William Henery is the son of Jeanne-Claude’s sister, Joyce May Henery. In 1993, he received a Bachelor of Arts from Fordham University. He is a musician and has been Jeanne Claude’s full-time assistant 1996-2009 and continues to manage Christo’s office today. Jonathan has collaborated on numerous publications about their work.

What They Didnt Teach You in Art School

Diablo Bestiary - The Book of Adria

The Empress of Art