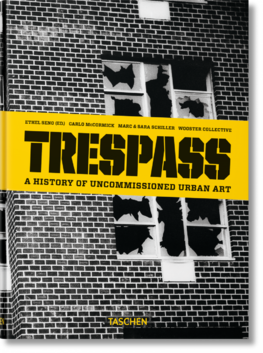 Carlo McCormick, Marc and Sara Schiller, Ethel Seno
24,95 €
Na sklade
Made in collaboration with its featured artists, Trespass traces the rise and global reach of graffiti and urban art, not just as a fringe visual movement but as a social phenomenon and central expression of youth.

The book is set out in thematic chapters that engage with the central theme of 'trespassing'. While images of the works are allowed to speak for themselves, each theme is prefaced by a brief essay to provide thought-provoking context to the history, politics, protest, and illicit performance of self-expression in the social space. Writers include Anne Pasternak (director of public arts fund Creative Time) and civil rights lawyer Tony Serra.

Carlo McCormick is a pop culture critic, curator and Senior Editor of Paper magazine. His numerous books, monographs and catalogs include Beautiful Losers: Contemporary Art and Street Culture, The Downtown Book: The New York Art Scene 1974-1984, andDondi White: Style Master General. His work has appeared in Art in America, Art News,Artforum and many other publications.

Marc & Sara Schiller founded Wooster Collective in 2001, a website that celebrates and plays a crucial role in documenting otherwise ephemeral street art. Based in New York City, the collective curated most of the contemporary images in Trespass. Its "Wooster On Paper" series presents the work of international artists in limited edition books.

Ethel Seno received her BA in the College of Letters from Wesleyan University before teaming with TASCHEN, where she worked with William Claxton on Jazzlife and New Orleans 1960, and David LaChapelle on Artists & Prostitutes and Heaven to Hell. Having grown up in Tokyo, she feels most at home in urban environments and currently resides in Los Angeles.

Noir: The Romance of Black in 19th-century French Drawings and Prints

Gods and Heroes in Art