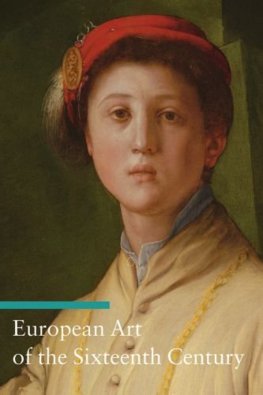 European Art of the Sixteenth Century

In the sixteenth century, the humanist values and admiration for classical antiquity that marked the early Renaissance spread from Italy throughout the rest of the continent, resulting in the development of a number of local artistic styles in other countries. Artists were highly valued and richly compensated during this period, with many receiving lucrative commissions from papal, royal, and private patrons. Among the sixty artists whose works are presented in this volume are towering figures of Western art, such as Michelangelo, Raphael, El Greco, and Titian. Venetian painters led the way, as oil on canvas supplanted fresco as the most popular medium. Italian Mannerists, such as Pontormo, deviated from classical forms, creating figures with elongated proportions and exaggerated poses. In countries that experienced the Protestant Reformation, such as England, many artists turned to portraiture and other secular subjects. This second volume in the "Art through the Centuries" series is divided into three sections that discuss the important people, concepts, and artistic centres of this innovative period. Important facts are summarized in the margins of each entry, and key facets of the illustrations are identified and discussed. New in the "Art Through the Centuries" series, it contains 400 full colour illustrations.

European Art of the Fifteenth Century

Art Is Everywhere How to Really Look at Things

The Art of Battlefield V