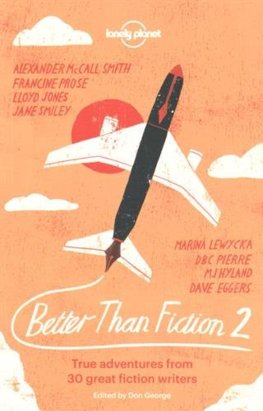 Varied in place, plot and voice, these are stirring and evocative pieces that all share one common characteristic-they manifest a passion for the precious gift of travel, from its unexpected but inevitably enriching lessons about other peoples and places, to the truths, sometimes uncomfortable but always enlarging, it reveals about ourselves.

By turns comic, dramatic, and moving - from Francine Prose's confrontation of the mysteries of India to DBC Pierre's search for Hemingway's muse in Italy - these 30 short tales reveal the joys, perils, and surprises of travel, and that truth can often be stranger (and better) than fiction.

Whether on a plane en route to your own travel adventure, or at home settling in for a vicarious experience of world adventures, embark on this literary journey around the world and explore your passion for travel now!

About Lonely Planet: Started in 1973, Lonely Planet has become the world's leading travel guide publisher with guidebooks to every destination on the planet, as well as an award-winning website, a suite of mobile and digital travel products, and a dedicated traveller community. Lonely Planet's mission is to enable curious travellers to experience the world and to truly get to the heart of the places they find themselves in.

'Lonely Planet. It's on everyone's bookshelves; it's in every traveller's hands. It's on mobile phones. It's on the Internet. It's everywhere, and it's telling entire generations of people how to travel the world.' -- Fairfax Media

'Lonely Planet guides are, quite simply, like no other.' - New York Times

Hologram for the King

The Joy and Light Bus Company

World According to Bertie

Lights Out In Wonderland

Peggy Guggenheim: The Shock of the Modern

Sagas of the Icelanders

FORK IN THE ROAD, A