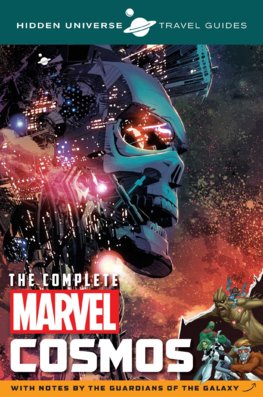 The ultimate guidebook to Earth, the Nine Realms, and other dimensions from Marvel Comics, as told by Peter Quill, Rocket, Groot, and the rest of the Guardians of the Galaxy. Ever since Super Heroes like Thor started stomping around planet Earth, we ve had to open our horizons a little and embrace the wider cosmos. If you re thinking of journeying to one of the many new realms for a little R n R, then don t leave Earth without Hidden Universe s guide to the cosmos, heavily annotated by Peter Quill, Gamora, Rocket, and the other members of the Guardians of the Galaxy. Whether you re looking to spend some quality time enjoying the divine splendor of Asgard or to soak up the multicultural atmosphere of floating intergalactic waypoint Knowhere, this is the book for you. It ll even provide some tips on surviving an excursion to the Skrull Empire, if you like your vacations to be on the extreme side. Along with breaking down the hotspots to visit at every major location in the known universe, this guide also has reams of information on the various beings that can be found throughout the cosmos, as well as their varying cultures; this can come in real handy because you sure don't want to upset an Ice Giant or get on the wrong side of an angry Kree. Filled with helpful maps, star charts, and phrase guides (if you re visiting Groot s home of Planet X, you ll be surprised how many different ways there are to say I am Groot ), the Hidden Universe s guide to the cosmos is the best way to get the most out of your intergalactic vacation. (c) Marvel"

The Art of Harry Potter