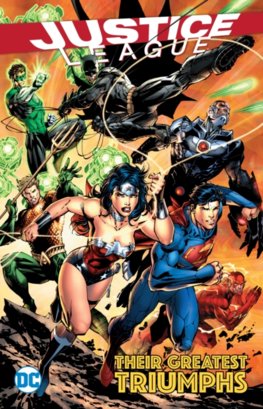 Prepare for the highly anticipated film Justice League with this story written by comics greats Geoff Johns (DC UNIVERSE: REBIRTH), Mark Waid (JLA: YEAR ONE), Brad Meltzer (IDENTITY CRISIS), Kurt Busiek (ASTRO CITY) and Mark Millar (Kickass), with art from the legendary Jim Lee (SUICIDE SQUAD), Ivan Reis (AQUAMAN), Doug Mahnke (GREEN LANTERN) and more. This collection of the biggest victories from the Worlds Greatest Super-Heroes, JUSTICE LEAGUE: THEIR GREATEST TRIUMPHS, offers a chance to get to know Superman, Batman, the Flash, Wonder Woman, Cyborg and Aquaman in these seven tales from the pages of JUSTICE LEAGUE and JLA. From alien invasions and hostile visitors from other dimensions to this planet's own endless supply of super-villains, when enemies of Earth appear, the Justice League answers the call.

Though the lineup of League members may vary, the mission is the same. They are humanity's ultimate protectors, the world's greatest superheroes. And they will triumph.