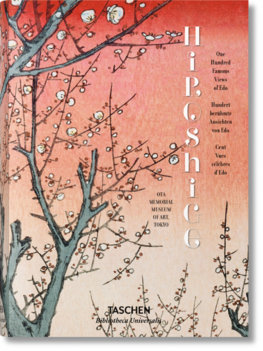 Utagawa Hiroshige (1797–1858) was one of the last great artists in the ukiyo-etradition. Literally meaning “pictures of the floating world,” ukiyo-e was a particular genre of art that flourished between the 17th and 19th centuries and came to characterize the Western world’s visual idea of Japan. In many ways images of hedonism, ukiyo-escenes often represented the bright lights and attractions of Edo (modern-day Tokyo): beautiful women, actors and wrestlers, city life, and spectacular landscapes.

Though he captured a variety of subjects, Hiroshige was most famous for landscapes, with a final masterpiece series known as “One Hundred Famous Views of Edo” (1856–1858), which depicted various scenes of the city through the seasons, from bustling shopping streets to splendid cherry orchards.

This reprint is made from one of the finest complete original sets of woodblock prints belonging to the Ota Memorial Museum of Art in Tokyo. It pairs each of the 120 illustrations with a description, allowing readers to immerse themselves in these beautiful, vibrant vistas that became paradigms of Japonisme and inspired Impressionist, Post-Impressionist and Art Nouveau artists alike, from Vincent van Gogh to James McNeill Whistler.