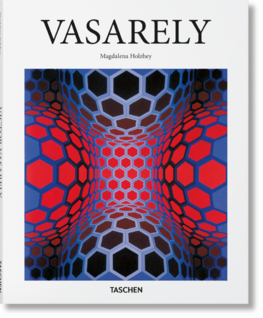 Magdalena Holzhey
12,50 €
Na objednávku
Enter a universe of shimmering color and pure abstraction. Pioneer of the Op Art movement, Victor Vasarelydeveloped his own geometric visual language, exploring the relationship between color and form in bold, eye-popping paintings. Spanning his first experimentation with optical effects in the ’40s and his attempt to “democratize art,” this collection celebrates Vasarely’s unique legacy.

Hungarian-French painter Victor Vasarely(1906–1997) was a precocious talent. His earliest surviving painting, a landscape done at age 12, baffled through its realism—an indication of the compelling illusions of spatial depth that would later define his dazzling universe.

Inspired by the likes of Malevich and the Bauhausschool, Vasarely developed his own abstract-geometric visual language, exploring the relationship between pure form and pure color. Vasarely’s experimentation with optical effects in the 1940s and ’50s earned him a central role in the evolution of Op Art. By the late ’50s and early ’60s, he concentrated on the “democratization of art” by producing “multiples”—reasonably priced original
works reproduced in large editions. Vasarely’s attempt to “destroy the completely obsolete myth of the unique, inimitable masterwork” was a tremendous contribution to art theory. To him, there was no place for hierarchical division into originals and reproductions, nor for distinction between fine and commercial art—“We cannot leave the enjoyment of art to an elite of connoisseurs forever,” he declared. Thisredefinition of the artist’s position and function in society marked a crucial first step in the Pop Artmovement.

Vasarely’s boldly colorful and eye-popping paintings are instantly recognizableand remain entirely modern and relevant today. In this dependable introduction, we explore the makings of an artist ahead of his time. Crisp reproductions and insightful texts celebrate the father of the Op Art movement, from his earliest hypnotizing optical illusions to his hallmark checkerboard works.

Magdalena Holzheystudied art history, Italian, and musicology in Berlin and Pisa. She held various academic and curatorial positions in galleries and museums, including the K20 Kunstsammlung Nordrhein-Westfalen in Düsseldorf, before becoming Curator of Collections of the Kunstmuseen Krefeld. She has published widely on classical modernism and contemporary art.