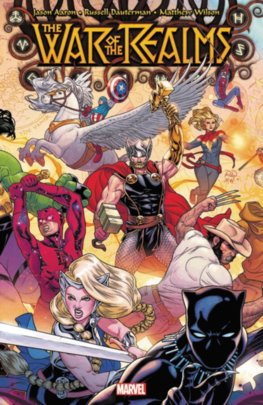 War of the Realms

THE WAR OF THE REALMS is upon us! Malekith, king of the Dark Elves, has been conquering the Ten Realms and now has his sights set on the last one: Earth. And with armies of Frost Giants, Fire Goblins, trolls, angel warriors, Roxxon corporate soldiers, the Enchantress and the prince of lies himself, Loki, at his side, Malekith may just succeed. Asgardia is no more, Old Asgard is in ruins, and the majority of Asgardians are refugees on Earth. Now Thor and Earth's heroes -- including the Avengers, the Fantastic Four, and even such unlikely allies as Venom and Punisher -- are all that stand in Malekith's way! It's an event five years in the making as the MIGHTY THOR creative team of writer Jason Aaron, artist Russell Dauterman and colorist Matthew Wilson reunite to save the Ten Realms!
COLLECTING: WAR OF THE REALMS 1-6, WAR OF THE REALMS: OMEGA

Superman The Coming of the Supermen