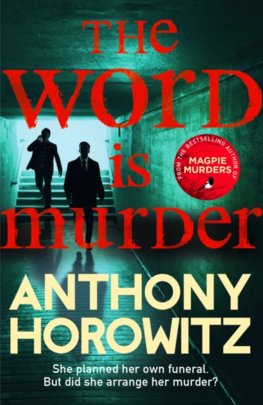 SHE PLANNED HER OWN FUNERAL. BUT DID SHE ARRANGE HER MURDER?
Buried secrets, murder and a trail of bloody clues lie at the heart of Anthony Horowitz's page-turning new detective series. If you enjoyed BBC's Sherlock, you'll LOVE The Word is Murder!

"A very clever and inventive mystery" (Bookbag)
"A perfect detective novel in a unique style complete with an excellent twist!" (Life Has a Funny Way of Sneaking Up On You)
'With its unorthodox protagonist, clever plotting, brilliantly imperfect characters, and escalating sense of urgency and intrigue, THE WORD IS MURDER is an instant crime classic that will keep you reading as fast as you can...

one of the best and most compulsively readable mysteries of the year. Hugely satisfying on every level." (Written by Sime)
'Will undoubtedly exhilarate not only crime and Horowitz fans but anyone who enjoys the sense of metafiction and fourth wall breaking found in books by authors like Lemony Snicket, Bret Easton Ellis and Martin Amis.' (Fiendfully Reading)

A wealthy woman strangled six hours after she's arranged her own funeral.
A very private detective uncovering secrets but hiding his own.
A reluctant author drawn into a story he can't control.
What do they have in common?

Unexpected death, an unsolved mystery and a trail of bloody clues lie at the heart of Anthony Horowitz's page-turning new thriller.

Forever and a Day