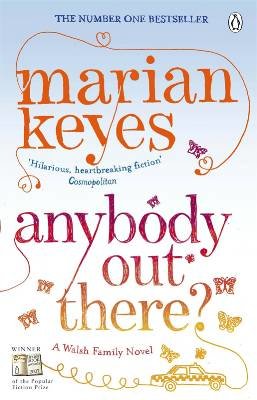 Winner of the 2007 Popular Fiction Prize, Anybody Out There by Marian Keyes is a novel of love, loss and jealousy that is as sharply funny as it is deeply moving. It is the fourth of Marian Keyes’s internationally best-selling Walsh sisters novels which also include Watermelon, Rachel’s Holiday, Angels and now The Mystery of Mercy Close.

'I had to go back to New York and try to find him. There was a chance he mightn't be there but I had to give it a go because there was one thing I was certain of: he wasn't here.'

Anna Walsh is officially a wreck. She's covered in bandages and she's lying in her parents' Good Front Room dreaming of leaving Dublin and getting back to New York.

To The Most Fabulous Job in the World™.

And most of all back to Aiden.

But her family have other ideas. And Aiden, for some reason, seems unwilling to get in touch.

What happened to send Anna so far from all that she loves? And is Aiden really the only one who can put it all right?