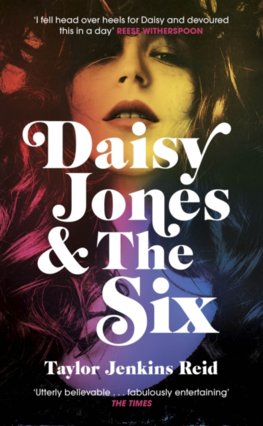 Daisy Jones and The Six

Their albums were on every turntable, they sold out arenas from coast to coast, their sound defined an era. And then, on 12 July 1979, they split.

Nobody ever knew why. Until now.

They were lovers and friends and brothers and rivals.

They couldn't believe their luck, until it ran out. This is their story of the early days and the wild nights, but everyone remembers the truth differently.

The only thing they all know for sure is that from the moment Daisy Jones walked barefoot onstage at the Whisky, their lives were irrevocably changed.

Making music is never just about the music. And sometimes it can be hard to tell where the sound stops and the feelings begin.
_________________

'reads like an addictive Netflix documentary meets A Star Is Born- despite being utterly fictional.

It's also a call-to-arms that when you find your niche, don't doubt, embrace it.' EMERALD STREET

'The verdict: Daisy Jonessteals the limelight... A zeitgeist book for 2019' STYLIST

'I spent a lost weekend in this book.

'DAISY JONES & THE SIX is a transporting novel - at once a love story, a glimpse into the combustible inner workings of a rock-and-roll band, and a pitch-perfect recreation of the music scene of the Fleetwood Mac era. You'll never want it to end.' CECILIA AHERN

'Once in a blue moon you get to discover a book you end up pressing upon many other people to read. Taylor Jenkins Reid has got every nuance, every detail exact and right.

I loved every word.'PAUL REES

'So brilliantly written I thought all the characters were real . . .

I couldn't put it down'EDITH BOWMAN

'A book that reads like an addictive Netflix documentary meets A Star Is Born - despite being utterly fictional .. . It's also a call-to-arms that when you find your niche, don't doubt, embrace it.' EMERALD STREET

'The characters leap off the page, seducing you with their dramas, and making you wish the band was real.' HEAT

'The heady haze of the 70s music scene, and a perfectly flawed Daisy, combine to create a fresh, rock n roll read.

I loved it.'ALI LAND, author of Good Me Bad Me

Daisy Jones and The Six

The Seven Husbands of Evelyn Hugo

A Pitying of Doves