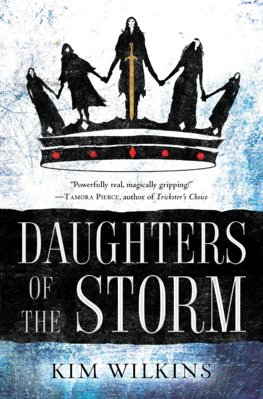 Daughters Of The Storm

Five very different sisters team up against their stepbrother to save their kingdom in this Norse-flavored fantasy epic--the start of a new series in the tradition of Naomi Novik, Peter V. Brett, and Robin Hobb. FIVE ROYAL SISTERS. ONE CROWN. They are the daughters of a king. Though they share the same royal blood, they could not be more different. Bluebell is a proud warrior, stronger than any man and with an ironclad heart to match. Rose's heart is all too passionate: She is the queen of a neighboring kingdom who is risking everything for a forbidden love. Ash is discovering a dangerous talent for magic that might be a gift--or a curse. And then there are the twins--vain Ivy, who lives for admiration, and zealous Willow, who lives for the gods. But when their father is stricken by a mysterious ailment, these five sisters must embark on a desperate journey to save him and prevent their treacherous stepbrother from seizing the throne. Their mission: find the powerful witch who can cure the king. But to succeed on their quest, they must overcome their differences and hope that the secrets they hide from one another and the world are never brought to light. Because if this royal family breaks, it could destroy the kingdom. Praise for Daughters of the Storm "This fantastic series opener, powered by an engaging, female-led cast of characters, is riveting from page one right through to the end, with almost every scene bringing new excitement and intrigue. All of the five leading women are richly drawn, with distinct voices and multidimensional personalities that never slip into caricature. [Kim] Wilkins sketches these royals with nuance and sensitivity, making even the vexing characters like careless Ivy and the villainous Wylm feel worthy of our sympathy. . . . Wilkins has struck gold with her thrilling high fantasy world. Book two can't arrive soon enough!"--RT Book Reviews "Readers who enjoy epic journeys and strong female protagonists will enjoy Wilkins's first installment of her new Sisters of the Fire series."--Booklist

"[Daughters of the Storm] is a twisty high fantasy . . . exploring political machinations and the relationships between sisters; betrayal lurks at every turn."--The Washington Post

Fall Or, Dodge In Hell