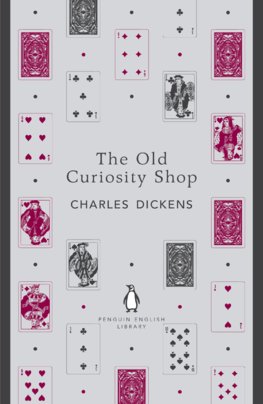 'But what added most to the grotesque expression of his face, was a ghastly smile, which, appearing to be the mere result of habit and to have no connexion with any mirthful or complacent feeling, constantly revealed the few discoloured fangs that were yet scattered in his mouth, and gave him the aspect of a panting dog'

The tale of Little Nell gripped the nation when it first appeared in 1841. Described as a 'tragedy of sorrows', the story tells of Nell uprooted from a secure and innocent childhood and cast into a world where evil takes many shapes, the most fascinating of which is the stunted, lecherous Quilp. Blending realism with non-realistic genres such as fairy-tale, allegory, and pastoral, the tale of Nell's tragedy contains some of Dickens most memorable comic and grotesque creations, including the dwarf Daniel Quilp, Dick Swiveller and Kit Nubbles.