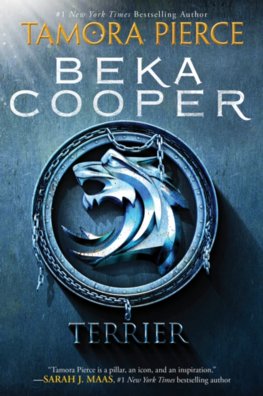 A New York Timesbestseller from the fantasy author who is legend herself: TAMORA PIERCE. In this first book in the Beka Cooper Trilogy, Beka uses her unique magic and street smarts to crack the kingdom's worst cases!

Keep out of the way. Obey all orders.

Get killed on your own time.

Beka Cooper is one of the newest trainees in the Provost's Guard. As a rookieknown as a Puppyshe's assigned to the realm's toughest district: the Lower City. It should be a death sentence.

The Lower City is filled with pickpockets who are fast as lightning, murderers stalking the streets, and rogues who will knock your teeth out with a smile. But Beka's not your average Puppy. She grew up in the Lower City and knows what makes it tick.

It's Beka who notices that there might be something more to the latest crime wave. And it's Beka who must use her street smarts and her own brand of eerie magic to chase down a killer.

This first book introduces Beka Cooper, an amazing young woman who is the ancestor of one of Tamora Pierce's most popular characters: George Cooper. Here, Pierce gives fans exactly what they wanta smart, savvy heroine making a name for herself on the mean streets of Tortall's Lower Citywhile offering plenty to appeal to new readers as well!

She is a pillar, an icon, and an inspiration. Cracking open one of her marvelous novels always feels like coming home."
SARAH J. MAAS, #1 New York Timesbestselling author

Her heroines cut a swath through the fantasy world with wit, strength, and savvy. Her stories still lead the vanguard today. Pierce is the real lioness, and we're all just running to keep pace."
LEIGH BARDUGO, #1 New York Timesbestselling author

Giraffe and the Pelly and Me NE

Turtles All the Way Down