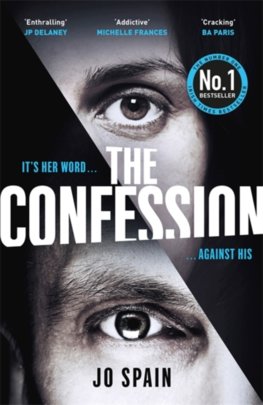 YOU FIND OUT WHO DID IT ON THE VERY FIRST PAGE. ON THE LAST PAGE, YOU'LL FIND OUT WHY.'I can't praise The Confession enough. Brilliant writing, great story .

. . a really cracking read' BA Paris, author of Behind Closed Doors and The Breakdown'Enthralling - Spain dissects her characters' secrets with razor-sharp precision' JP Delaney, author of The Girl BeforeLate one night a man walks into the luxurious home of disgraced banker Harry McNamara and his wife Julie.

The man launches an unspeakably brutal attack on Harry as a horror-struck Julie watches, frozen by fear. Just an hour later the attacker, JP Carney, has handed himself in to the police. He confesses to beating Harry to death, but JP claims that the assault was not premeditated and that he didn't know the identity of his victim.

With a man as notorious as Harry McNamara, the detectives cannot help wondering, was this really a random act of violence or is it linked to one of Harry's many sins: corruption, greed, betrayal?This gripping psychological thriller will have you questioning, who - of Harry, Julie and JP - is really the guilty one? And is Carney's surrender driven by a guilty conscience or is his confession a calculated move in a deadly game?THE MOST GRIPPING PSYCHOLOGICAL THRILLER OF 2018: PERFECT FOR FANS OF HE SAID, SHE SAID AND THE COUPLE NEXT DOOR.

Kafkas Last Trial: The Strange Case of a Literary Legacy