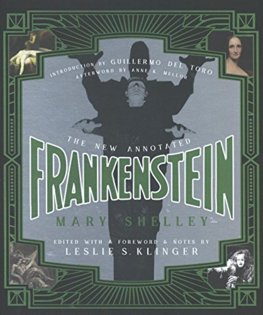 The most complete annotated volume of Mary Shelley's Frankenstein ever compiled appears for the 200th anniversary of the original publication.

"Remarkably, a nineteen-year-old, writing her first novel, penned a tale that combines tragedy, morality, social commentary, and a thoughtful examination of the very nature of knowledge", writes best-selling author Leslie S. Klinger. Yet Mary Shelley's Frankenstein is often reductively dismissed as a tacky monster film or a cautionary tale about experimental science gone haywire. Now, Klinger does for Shelley's story of early nineteenth-century horror what he did for Sherlock Holmes, Dracula and H. P. Lovecraft, bringing this gothic tale to nightmarish life by reproducing the original text with the most lavishly illustrated and comprehensively annotated edition to date.

For the first time, The New Annotated Frankenstein brilliantly accounts for variations between the 1818 and the 1831 versions of the text and includes an introduction by the director of Pan's Labyrinth, Guillermo del Toro, and an afterword by feminist scholar Anne K. Mellor. With over 200 illustrations and nearly 1,000 annotations, Klinger illuminates every hidden dimension of the "first truly modern myth."

In the Shadow of Edgar Allan Poe

Travels with Charley in Search of America

Hound of the Baskervilles