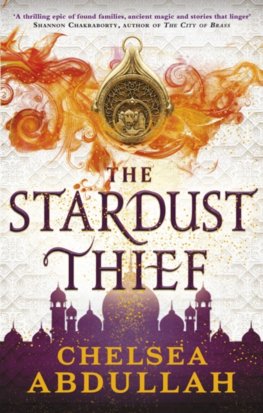 'The Stardust Thief will transport you, enchant you, and revive your belief in the magic of storytelling' Shelley Parker-Chan, author of She Who Became the SunInspired by stories from One Thousand and One Nights, The Stardust Thief weaves the gripping tale of a legendary smuggler, a cowardly prince and a dangerous quest across the desert to find a magical lamp. Neither here nor there, but long ago... Loulie al-Nazari is the Midnight Merchant: a criminal who, with the help of her jinn bodyguard, hunts and sells illegal magic.

When she saves the life of a cowardly prince, she draws the attention of his powerful father, the sultan, who blackmails her into finding an ancient lamp. With no choice but to obey or be executed, Loulie journeys with the sultan's oldest son to find the artefact. Aided by her bodyguard, who has secrets of his own, they must survive ghoul attacks, outwit a vengeful jinn queen and confront a malicious killer from Loulie's past.

And, in a world where story is reality and illusion is truth, Loulie will discover that everything - her enemy, her magic, even her own past - is not what it seems, and she must decide who she will become in this new reality. Praise for The Stardust Thief:'Sizzling with action and secrets, The Stardust Thief is a grand adventure with unforgettable characters, enchanting magic, and plenty of heart' Melissa Caruso, author of The Tethered Mage'A thrilling adventure about found families, ancient magic and stories that linger' S. A.

Chakraborty, author of The City of Brass'The Stardust Thief is a dream written upon a page - absorbing, lingering and poignantly told. Abdullah weaves a sweeping adventure of tales within tales, while laying bare the ways those we love can both uplift us and break our hearts' Andrea Stewart, author of The Bone Shard Daughter

Songs of the Earth