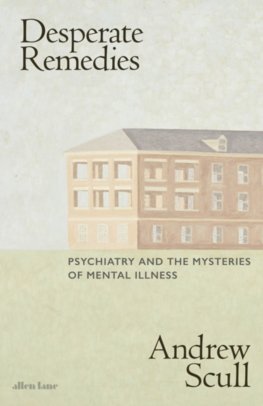 'A riveting chronicle of faulty science, false promises, arrogance, greed, and shocking disregard for the wellbeing of patients suffering from mental disorders. An eloquent, meticulously documented, clear-eyed call for change' Dirk WittenbornIn this masterful work, Andrew Scull, one of the most provocative thinkers writing about psychiatry, sheds light on its troubled historyFor more than two hundred years, disturbances of reason, cognition and emotion - the sort of things that were once called 'madness' - have been described and treated by the medical profession. Mental illness, it is said, is an illness like any other - a disorder that can treated by doctors, whose suffering can be eased, and from which patients can return.

And yet serious mental illness remains a profound mystery that is in some ways no closer to being solved than it was at the start of the twentieth century. In this clear-sighted and provocative exploration of psychiatry, acclaimed sociologist Andrew Scull traces the history of its attempts to understand and mitigate mental illness: from the age of the asylum and surgical and chemical interventions, through the rise and fall of Freud and the talking cure, and on to our own time of drug companies and antidepressants. Through it all, Scull argues, the often vain and rash attempts to come to terms with the enigma of mental disorder have frequently resulted in dire consequences for the patient.

Deeply researched and lucidly conveyed, Desperate Remedies masterfully illustrates the assumptions and theory behind the therapy, providing a definitive new account of psychiatry's and society's battle with mental illness.

The Biggest Prison on Earth A History of the Occupied Territories

A History of the Bible