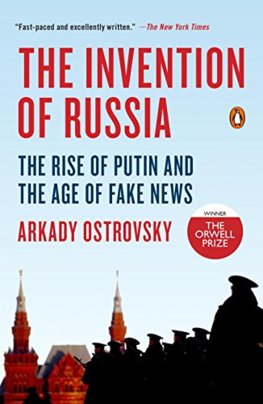 The breakup of the Soviet Union was a time of optimism around the world, but Russia today is actively involved in subversive information warfare, manipulating the media to destabilize its enemies. How did a country that embraced freedom and market reform 25 years ago end up as an autocratic police state bent once again on confrontation with America? A winner of the Orwell Prize, The Invention of Russia reaches back to the darkest days of the cold war to tell the story of Russia's stealthy and largely unchronicled counter revolution.

A highly regarded Moscow correspondent for the Economist, Arkady Ostrovsky comes to this story both as a participant and a foreign correspondent. His knowledge of many of the key players allows him to explain the phenomenon of Valdimir Putin - his rise and astonishing longevity, his use of hybrid warfare and the alarming crescendo of his military interventions. One of Putin's first acts was to reverse Gorbachev's decision to end media censorship and Ostrovsky argues that the Russian media has done more to shape the fate of the country than its politicians. Putin pioneered a new form of demagogic populism --oblivious to facts and aggressively nationalistic - that has now been embraced by Donald Trump. In his new paperback preface, Ostrovsky will explore how Putin influenced the US election, the Trump Putin access, and will consider how Putin's methods - weaponizing the media and serving up fake news - came to enter American politics.

The Origin of Species: (Patterns of Life)

The Workshop and the World

A Short History of Drunkenness