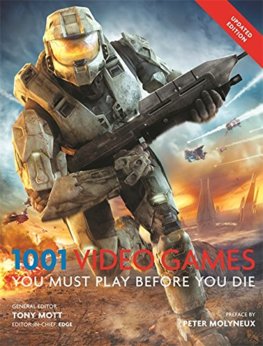 1001: Video Games You Must Play Before You Die

In fewer than fifty years videogames have become one of the most popular forms of entertainment, but which are the best games, the ones you must play?

This action packed book presents the best videogames from around the world - from 80's classic Donkey Kong to Doom, Frogger and Final Fantasy. Covering everything from old favourites to those breaking new ground, these are the games that should not be missed.

Video game expert Tony Mott presents 1001 of the best video games from around the world and on all formats, from primitive pioneering consoles like Atari's VCS to modern-day home entertainment platforms such as Sony's PlayStation 3.

1001 VIDEO GAMES defines arcade experiences that first turned video gaming into a worldwide phenomenon such as Space Invaders, Asteroids, and Pac-Man - games that made the likes ofAtari, Sinclair and Commadore household names. It also includes the games that have taken the console era by storm from Nintendo Wii to Sony Playstation and beyond - games of the modern era that have become cultural reference points in their own right including multi-million selling series such as Halo, Grand Theft Auto and Resident Evil.

For aficionados this is a keepsake - charting the highlights of the past fifty years giving them key information for games they must play. For those just discovering the appeal of gaming this extensive volume will provide everything they need to ensure they don't miss out on the games that revolutionized this overwhelmingly popular medium.

The Wonder Down Under

The Book of Humans

New Scientist: The Origin of (almost) Everything