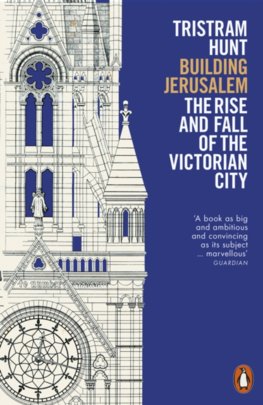 Tristram Hunt
The Rise and Fall of the Victorian City
18,95 €
Na sklade

'History writing at its compulsive best' A. N. WilsonThis is a history of the ideas that shaped not only London, but Manchester, Glasgow, Liverpool, Leeds, Birmingham, Sheffield and other power-houses of 19th-century Britain.

It charts the controversies and visions that fostered Britain's greatest civic renaissance. Tristram Hunt explores the horrors of the Victorian city, as seen by Dickens, Engels and Carlyle; the influence of the medieval Gothic ideal of faith, community and order espoused by Pugin and Ruskin; the pride in self-government, identified with the Saxons as opposed to the Normans; the identification with the city republics of the Italian renaissance - commerce, trade and patronage; the change from the civic to the municipal, and greater powers over health, education and housing; and finally at the end of the century, the retreat from the urban to the rural ideal, led by William Morris and the garden-city movement of Ebenezer Howard.

Ten Cities that Made and Empire

Napoleon: The Man Behind The Myth

Prague at the Turn of the Century