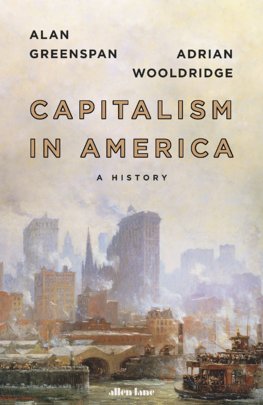 Where does innovation come from, and how does it spread through a society? And why do some eras see the fruits of innovation spread more democratically, and others, including our own, see the opposite? In Capitalism in America, Alan Greenspan distils a lifetime of grappling with these questions into a master reckoning with the decisive drivers of the US economy over the course of its history. In partnership with the journalist and historian Adrian Wooldridge, he unfolds a tale spanning vast landscapes, titanic figures, triumphant breakthroughs, enlightenment ideals as well as profound moral failings. Every crucial debate is addressed - from the role of slavery in the antebellum Southern economy to the real impact of Roosevelt's New Deal and America's violent mood swings in its openness to global trade.

At heart, the authors argue, America's genius has been its tolerance for the effects of creative destruction, the ceaseless churn of the old giving way to the new, driven by new people and new ideas. At a time when productivity growth has again stalled, stirring up the populist furies, and the continuation of American pre-eminence seems increasing uncertain, Capitalism in America makes for urgent reading.

Map and the Territory

The Aristocracy of Talent

The Algebra of Happiness

Retirement: The Psychology of Reinvention

To Kidnap a Pope: Napoleon and Pius VII

The New Confessions of an Economic Hit Man

The Four Thoughts That F... You Up