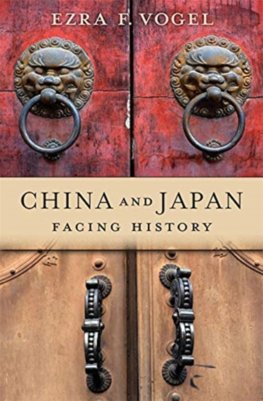 One of the world's most eminent scholars of East Asia reveals the important touchstones in the long history between China and Japan and argues that for the sake of world stability they must forge a new relationship for the twenty-first century. China and Japan have cultural and political connections that stretch back fifteen hundred years. But today their relationship is strained.

China's military buildup deeply worries Japan, while Japan's brutal occupation of China in World War II remains an open wound. In recent years less than ten percent of each population had positive feelings toward the other, and both countries insist that the other side must deal openly with its history before relations can improve. From the sixth century, when the Japanese adopted core elements of Chinese civilization, to the late twentieth century, when China looked to Japan for a path to capitalism, Ezra Vogel's China and Japan examines key turning points in Sino-Japanese history.

Throughout much of their past, the two countries maintained deep cultural ties, but China, with its great civilization and resources, had the upper hand. Japan's success in modernizing in the nineteenth century and its victory in the 1895 Sino-Japanese War changed the dynamic, putting Japan in the dominant position. The bitter legacy of the Second World War has made cooperation difficult, despite efforts to promote trade and, more recently, tourism.

Vogel underscores the need for Japan to offer a thorough apology for the war, but he also urges China to recognize Japan as a potential vital partner in the region. He argues that for the sake of a stable world order, these two Asian giants must reset their relationship, starting with their common interests in environmental protection, disaster relief, global economic development, and scientific research.

The Book of Tea

Waves Across The South: A New History Of Revolution And Empire