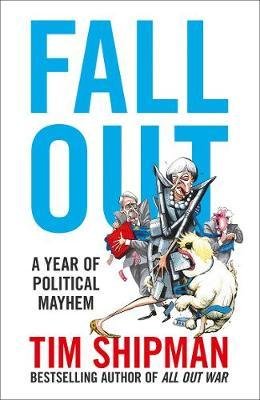 Fall Out: A Year Of Political Mayhem

By the bestselling author of All Out War, shortlisted for the Orwell Prize 2017

The unmissable account of politics covering Theresa May’s time as PM through to the end of the election campaign. Stuffed to the brim with revelation and explanation of political debates and arguments and a superb follow-up to All Out War

‘May you live in interesting times’ says the proverbial Chinese curse. And it is difficult to think of a recent period in which politics have been so unpredictable and fast-changing. As Political Editor of the Sunday Times, Tim Shipman has been at the forefront of it all. His book of last year, All Out War has become the book on the 2016 Referendum campaign. With unprecedented access to all key players on all sides, the book was hailed on publication as ‘unquestionably, the book of the year’ and ‘stonkingly good’, it is ‘hard to imagine a better first draft of history’. Shipman’s writing is noted for its grasp of human drama as well as his intimate understanding of the political arguments and differences at stake.

Fall Out continues the story of British politics from the entry of Theresa May into Downing Street as Prime Minister through to the end of the general election campaign – and its aftermath. Written with his trademark wit and access to sources no one else has, this book takes all who read it to the heart of the political drama that is unravelling every day before us as Britain tries to work out its new place in the world post Brexit.

How To Be Invisible

A Coup in Turkey