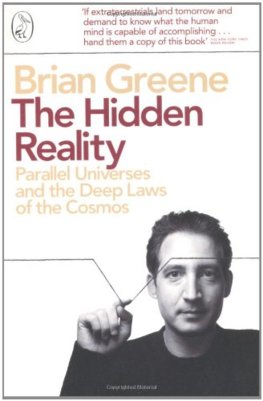 Brian Green
Parallel Universes and the Deep Laws of the Cosmos
13,50 €
Na sklade

Brian Greene's The Hidden Reality: Parallel Universes and the Deep Laws of the Cosmosexplores our most current scientific understanding of the universe, the 'string theory' that might hold the key to unifying nature's laws, and our continuing quest to know more.

There was a time when 'universe' meant all there is. Everything. Yet, as physicist Brian Greene's extraordinary book shows, ours may be just one universe among many, like endless reflections in a mirror.

He takes us on a captivating exploration of parallel worlds - from a multiverse where an infinite number of your doppelgangers are reading this sentence, to vast oceans of bubble universes and even multiverses made of mathematics - showing just how much of reality's true nature may be hidden within them.

'If extraterrestrials land tomorrow and demand to know what the human mind is capable of accomplishing ... hand them a copy of this book'
The New York Times Book Review

'A writer of exceptional clarity and charm ... every chapter opens level after level of previously unimaginable, mind-expanding realities'
Oliver Sacks

Brian Greene is well known to many fans as a populariser of theoretical physics. He is the author of the bestselling books about string theory, The Elegant Universe, which was a finalist for the Pulitzer Prize for nonfiction, The Fabric of the Cosmos, and The Hidden Reality. Educated at Harvard and Oxford, he has taught at both Harvard and Cornell and has been Professor of Physics and Mathematics at Columbia University since 1996.

The Logic and Statistics of Fat Tails

Life through Time and Space

The Story of Sex

Automating the News: How Algorithms Are Rewriting the Media